A highlight in the history of Islamic and European medicine

Folio. 159, (1 blank) ff. Text set in two columns in a gothic rotunda type with the headings of different capitals ("CAP. ...") set in roman type. With spaces (left blank) for hand-drawn initials and with some woodcut initials throughout. With the woodcut printer's device of Octavianus Scotus at the end of the work. 18th-century brown goatskin, blind-tooled double fillet frame on both boards, gilt-ruled spine with red morocco spine label lettered in gold, gold-tooled board edges and inner dentelles, red edges, orange ribbon marker, marbled endpapers.

Extremely rare second edition of Al-Razi's "Kitab al-Mansuri" (Book of Medicine dedicated to Mansur): a short general textbook on medicine in ten chapters, which he dedicated to the Samanid prince Abu Salih al-Mansur ibn Ishaq, governor of Ray, in 903. The work was rendered into Latin as "Liber ad Almansorem" by Gerard de Sabloneta, a 13th-century Italian who specialized in translating Arab medical texts and is said to have translated the work of the great Islamic scholar Ibn Sina (Avicenna, 980-1037) by order of Emperor Frederick II. The first Latin printed edition of "Al-Mansuri" was produced in Italy in 1481. This incunabular edition contains all ten books of the "Liber ad Almansorem", which were seldom printed together: usually only parts of the book were published, most frequently Book 9, which was a popular text under the Latin title "Liber nonus ad Almansorem", and numerous editions were printed in Renaissance Europe with commentaries by prominent physicians of the day, containing descriptions and treatments for a wide range of physical ailments, including epileptic fits, gall stones, ulcers, and toothaches. The ten books present here are considered one of the first medical textbooks printed, covering a range of medical subjects: (1) anatomy and physiology, (2) the tempers, (3) simple remedies, (4) health, (5) skin diseases, (6) diet, (7) surgery, (8) poisons, (9) diseases of the various organs, and (10) fevers. This edition also includes the author's famous treatise titled "De aegritudinibus puerorum", the first treatise entirely devoted to childhood diseases. He clearly discusses the etiology and semeiology of 24 such ailments (including smallpox and measles) with their mostly herbal remedies, each one in a separate chapter. This is followed by additional short treatises by various authors, including Musa ibn Maymun (Maimonides), Yuhanna ibn Masawaih (Mesue the Elder), and ibn Zuhr of Seville (Avenzoar).

This is one of the main works in mediaeval and Renaissance medicine, written by the Persian physician Abu Bakr Muhammad bin Zakariyya al-Razi (854-925, often known as Razi, Rhazes or Rhasis), arguably the most celebrated and most original of the mediaeval writers during the Islamic Golden Age. He is widely regarded as one of the most important figures in the history of medicine and had a widespread influence on both the Islamic world and late mediaeval European medicine. A comprehensive thinker, al-Razi made fundamental and enduring contributions to various fields, which he recorded in over 200 manuscripts, and is particularly remembered for numerous advances in medicine through his observations and discoveries. An early proponent of experimental medicine, he became a successful doctor and served as chief physician of Baghdad and Shahr-e Rayy hospitals. As a teacher of medicine, he attracted students of all backgrounds and interests and was said to be compassionate and devoted to the service of his patients, whether rich or poor. He was the first to clinically distinguish between smallpox and measles, and suggested sound treatments for the former.

In translation, al-Razi's medical works and ideas became known among mediaeval European practitioners and thus profoundly influenced medical education in the Latin West. Some parts of his "Liber ad Almansorem", namely "On Surgery" and "A General Book on Therapy", became part of the medical curriculum in Western universities. Edward Granville Browne considers him "probably the greatest and most original of all the Muslim physicians, and one of the most prolific as an author". He has also been described as the father of paediatrics and as a pioneer of obstetrics and ophthalmology. Notably, he became the first human physician to recognize the reaction of the eye's pupil to light.

Early editions of al-Razi’s "Liber ad Almansorem" are extremely uncommon on the market, with only two auction records on RBH for this second edition of 1497 (in 1955 and 1994), the first 1481 edition being equally rare, if not rarer.

With some 17th century marginal annotations (partly cut off). Binding slightly worn around the edges, boards very slightly shaved. Some very light staining to the first and last leaves, otherwise in good condition. 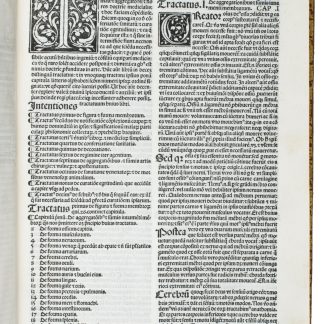