Remarkable series of 89 autograph letters and postcards to his publishers Hugo and Gustav Bock. To judge from the catalogue of Reger's letters made available online by the Max-Reger-Portal, only some 30 items in the present collection would appear to be recorded or published: some of them are to be found, often only in extract form, in Lotte Taube's "Max Regers Meisterjahre (1909-1916)" (1941); others survive institutionally in Meiningen in the form of transcripts. The correspondence reveals in great detail Reger's relationship with the Berlin publishing firm of Bote & Bock, discussing many of Reger's compositions, including op. 76, 82, 100, 106, 112, 113, 115, 117, 118, 120, 123, 125, 126, 128, 129, 130, some letters with musical examples.

Hugo Bock (1848-1932) had run the venerable German publishing house of Bote & Bock from the age of 23 and was largely responsible for building the company's international reputation; Gustav Bock (1882-1953) was Hugo's eldest son. In 1908, the year before the present correspondence begins, the company acquired the firm of Lauterbach & Kuhn in Leipzig, and thus the rights to much of Reger's music. This move angered Reger, who made it his aim to end his relationship with the company as quickly as possible. In the end, up to 1913, Bote & Bock published Reger's works bearing the opus numbers 103b to 129, among them the third clarinet sonata (op. 107), the three Geistliche Gesänge (op. 110), as well as the great Meiningen orchestral works. The last letter in the series dates from August 1915; only nine months later the composer was dead.

Some letters docketed by the recipients, some with punch holes, a few newspaper cuttings. Overall in good condition. 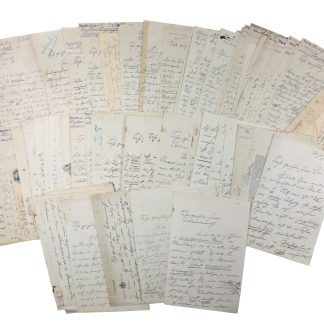