4to. 77 original photographs, comprising 48 colour and 29 black-and-white photos. Ca. 85 x 110 mm. With one Aramco press photograph. Captioned in English. Contemporary half calf with giltstamped spine in a full calf case with metal clasp.

Private photo album of the petroleum engineer and Aramco employee Herschel Edmund Zirger (1926-2015). After joining Aramco in 1955, Zirger was involved in the construction of the ADMP-2 platform - a gigantic off-shore oil rig showcased here in impressive photographs which make up the bulk of the collection. Built in the fall of 1965 and spring of 1966 in Vicksburg, it was towed down the Mississippi river, across the Atlantic and through the Suez Canal, to arrive in Saudi Arabia in September 1966. The set includes spectacular images of the rig being launched into the river, passing under the Natchez-Vidalia Bridge, the largest bridge on the Mississippi, and travelling past New Orleans. A pioneering project, the ADMP-2 platform was constructed "to operate in 200-ft water depths compared to the 77-ft maximum of the earlier rig [ADMP-1]. The design of the No. 2 also anticipates Aramco moving out into deeper Gulf waters" (World Petroleum).

Another set of images displays the arduous transport of an oil rig derrick through the desert near Abqaiq. Zirger is seen posing in front of enormous trucks and following the convoi. Sadly, the endeavour ended in a severe accident: after weeks of hard work, the derrick was destroyed in a desert storm.

Finally, several images depict an oil platform in the Arabian Sea, including detailed views of a drill head.

Nearly every picture is captioned in white ink in Zirger's handwriting. Zirger's label of ownership to front cover.

In 1971 Zirger established a Saudi-Registered Limited Liability Partnership which provided consulting services and consultants to Aramco for the supervision, inspection and maintenance of oil wells, water wells and drilling operations. 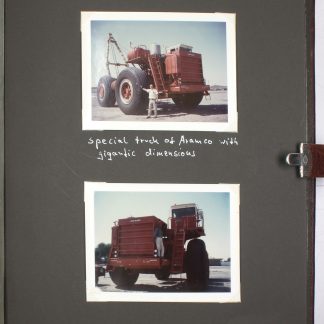