[Trucial Cost Trade]. - Maclean, H. W. Trade with the Muscat Region. Report on the Condition and Prospects of British Trade in Oman, Bahrein, and Arab Ports in the Persian Gulf.

London, printed for His Majesty's Stationery Office, by Eyre and Spottiswoode, (1904).

First edition of this rare and highly interesting commercial report. Maclean, Special Commissioner of the Commercial Intelligence Committee of the British Board of Trade, travelled to Muscat in February 1904 and made detailed notes on the trade of Oman (imports, exports, coinage, weights, freight and course of trade). He then visited Bahrain and gathered information on its increasing trade before returning to Karachi via Bushire and Kuwait. The notes on Bahrain provide a valuable insight into its economy, which - less than thirty years before the discovery of oil - still relied strongly on pearl fishing ("the annual value of pearls exported is estimated at £350,000 to £400,000").

Extremities dusty and slightly fragile, otherwise very good. Withdrawn from the University of Hull with requisite stamps to cover-title. Rare; no copies in LibraryHub. WorldCat locates just one, at the University of Erfurt. 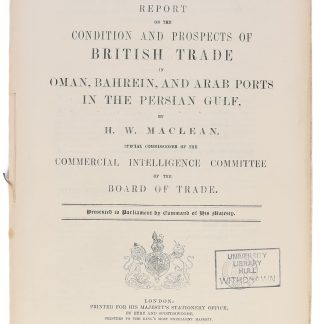