[Tibet]. The Perfection of Wisdom in Eight Thousand Lines.

20 x 65 cm. 314 sheets of heavy, multi-layered paper stained in blue over the whole area, varnished on the writing space, surrounded by a frame, within which are written 8 lines of approximately 80 characters in Tibetan uchen (dbu-can) script using gold ink. Each leaf written on both sides. Upper cover from another manuscript, in black ink; beneath a flap are 2 lines of very large script with the words "in the language of India". The first leaves of the manuscript contain 4, 5, 6 and 7 lines of script. Text is complete.

A canonical Buddhist sutra and the central text of the Mahayana Prajnaparamita school. The present text is a Tibetan translation from the original Sanskrit, of which there are also Chinese, Korean, and Japanese translations. The "Perfection of Wisdom" sutra exists in a range of shorter and longer recensions, of which that in 8,000 lines is regarded as having been the source, since according to Buddhist belief, its precursor, no longer extant, in Buddhist Prakrit, the vernacular language actually spoken by the Buddha, transmitted the actual spoken words of the Buddha. This Sanskrit text was then expanded into versions in 10,000, 18,000, 25,000, and 100,000 lines or verses, for the advanced adepts who could appreciate detailed commentary, and on the other hand abbreviated to versions in 2,500, 700, 500, 300, 150 and 25 lines for those of lesser understanding. Modern scholarship considers that the text was elaborated by a series of additions to a small original core, not identical to any of the later 'short' versions, over the period from 50 to 700 CE.

The first Tibetan translation was made in around 850 CE and the second in 1020 CE. By this time the text had achieved its canonical form. Further comparison with the Sanskrit original and with additional Sanskrit manuscripts led to revisions of the Tibetan translation in 1030, 1075 and 1500. The Tibetan translation achieves a high level of understanding and accuracy and has been useful to modern scholars occupied in establishing and analysing the Sanskrit text. The whole range of Tibetan versions of the sutra on the "Perfection of Wisdom" has been edited, translated and commented on by Edward Conze.

The sutra recounts a debate at Rajagriha, on the Vulture Peak, where 1,250 Buddhist monks gathered to hear the Buddha. The other main speakers are the Buddha's disciples Subhuti, who puts forward the Prajnaparamita principles, and Sariputra, who puts forward the conservative views of those monks who are unable to follow these new developments.

While there is no colophon, this manuscript was almost certainly donated or sponsored by a lay person who hoped to win merit by financing the copying of the text. This manuscript is a superb example of Tibetan uchen (dbu-can) calligraphy produced during the 13th and 14th centuries. The text shows a few archaistic orthographic characteristics, such as the presence of the da-drag (the letter 'da' as a secondary suffix for some syllables), which suggest an early date, probably 13th or 14th century.

Although the manuscript is not illustrated, it displays some of the best uchen calligraphy produced in Tibet. The gold letters are pleasingly spaced and very exactly executed on the lustrous blue ground, which represent "the clear empty space, the void from which all things arise".

Some damage to the outer corners of the upper and lower 10-20 leaves. With very early marginal patches over tears from frequent turning of the pages. 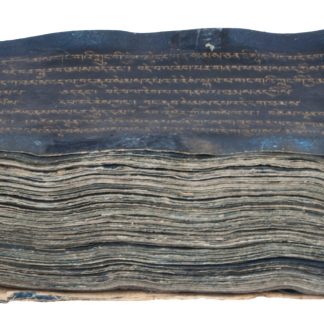