8vo. 60 ff. With Giunta's device on the title-page (a Florentine lily with the L. A. initials). Later vellum with more recent end leaves.

First edition of Jacob Mantino's translation into Latin of the fourth part of the first book of Ibn Sina's Canon of Medicine (original title: al-Qanun fi at-Tibb), divided into 31 chapters. Mantino dedicated it to the Doge of the Venetian Republic, Andrea Gritti (1455-1538).

Jacob Mantino (1490-1549) was a Jewish doctor, rabbi and philosopher. He was born in Spain, but he, his family and the Jewish community in Tortosa were forced to flee after refusing Catholic baptism, as decreed by King Ferdinand II and Queen Isabella I of Spain. Mantino grew up in Italy and studied philosophy and medicine at the universities of Bologna and Padua. Most of his adult life was spent being a doctor to the pope and other prominent members of society like cardinals, bishops and ambassadors in Bologna, Verona, Venice and Rome. He was also involved in the (religious) controversy over Henry VIII's divorce from Catharine of Aragon. In 1549, just before his death, he moved to Damascus as ambassador of Venice. Mantino's intellectual production focused on the translation of scientific works from Hebrew and Arabic into Latin, especially medical and philosophical treatises by leading authors of the medieval period, including Moses ben Maimon (Maimonides), Ibn Rushd (Averroes), and Ibn Sina (Avicenna).

Abu 'Ali al-Husayn Ibn Sina (also known by his Latinized name Avicenna, 980-1037) was one of the most prominent intellectuals of the medieval period and of the Islamic Golden Age. He was a Persian polymath; he wrote works on an incredible wide variety of subjects, including philosophy, medicine, astronomy, geography, psychology, Islamic theology, physics, and even poetry. Ibn Sina is mainly known for his medical encyclopaedia The Canon of Medicine, which became a standard medical text for medical students until the late 17th century.

The present work was printed by one of the most successful and important late 15th and early 16th century Italian publishers, Lucantonio Giunta (1457-1538). He was originally from Florence, but was active in Venice from 1489. He was a member of the Giunta family of printers, publishers and booksellers, who were active throughout Europe.

With owner's inscriptions on the front and back paste-downs and on the title-page, and some marginal annotations in brown ink. The paste-downs are partially covered by the newer, slightly foxed, end leaves. The binding is somewhat stained, light water staining to the first half of the work, small restored tears in the outer margin of leaves d1 and d2 without affecting the text. Otherwise in good condition. 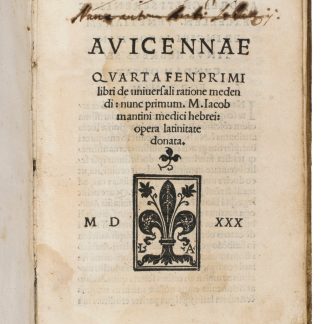