Gertrude Bell's personal copy of this excessively rare manual on the social, political and economic structures of the Arab tribes living in the Baghdad Vilayet (Province) as drawn up in July 1918, only months before the partitioning of the Ottoman Empire ended the old administrative divisions and led to the formation of several new states - indeed, to the creation of the modern Arab world.

Arranged alphabetically by the names of the tribes, this handbook - essentially a carefully compiled and redacted British intelligence file printed for the use of British Political Officers and their assistants in a region then undergoing dramatic upheavals - offers surprisingly detailed information on the tribes' origins, loyalties and internal quarrels, the locations of their settlements, strength of their possessions, economic and bargaining power, as well as their kinships, often including genealogical tables. The names of the tribes' leaders are given in full, frequently also in the original Arabic.

Gertrude Bell (1868-1926), who had firsthand experience among the tribes, signed her name in pencil ("Gertrude Lowthian Bell") on the front free endpaper. Several neatly pencilled additions to some of the entries are likewise in her hand: next to the name Fahad ibn Hadhdal she notes that he died and the name of a "rival" (this underlined), apparently a "bin Dughaiyin" (p. 16). In another entry she notes that Jazza' ibn Mijlad "blockaded Turks in North for allies in 1st war" (p. 17) and that the A'marat prefer to winter near al-Hafan. There are several references to her fellow political officer, St John Philby, and a correction that the Al-Dulaim are "all Sunnis" (p. 265), and none Shi'ahs.

Gertrude Bell was a traveller, political actor, and archaeologist who was a key player in the nation-building after World War I, especially in Iraq. She founded the Iraq Museum, translated Persian poetry, and advised the British government's foreign policy at nearly the highest level. It is little surprise that she would have owned one of the few copies of this important source, containing otherwise nearly unobtainable population statistics as well as details on the political history of a region in which traditional tribal feuds became mingled with international high politics. Considering the limited scope of intended distribution and the sensitive nature of the information contained, it is safe to say that this invaluable compendium never had more than a very limited press-run; indeed; only three copies are known today in libraries worldwide, and none with such unique provenance.

Covers rubbed, title-page brittle and reinforced with two library stamps carefully removed but still faintly visible. Later in the collection of the American missionary turned political biographer Harry J. Almond (1918-2007), with his handwritten ownership in ink next to Bell's own. In all very well preserved. No copy in auction records. 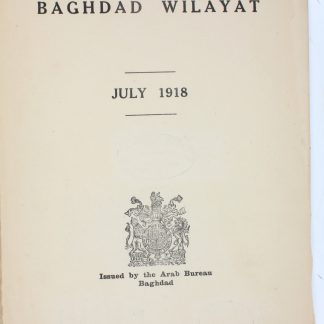