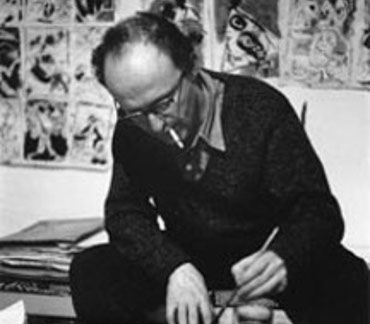 Alechinsky has lived and worked in France since 1951. His work is related to tachisme, abstract expressionism, and lyrical abstraction. In 1949 he joined Christian Dotremont, Karel Appel, Constant, Jan Nieuwenhuys and Asger Jorn to form the art group Cobra. He participated both with the Cobra exhibitions and went to Paris to study engraving at Atelier 17 under the guidance of Stanley William Hayter in 1951. In 1954 he had his first exhibition in Paris and started to become interested in Chinese and Japanese calligraphy. His international career continued throughout the seventies and by 1983 he became Professor of painting at the École nationale supérieure des Beaux-Arts, Paris.