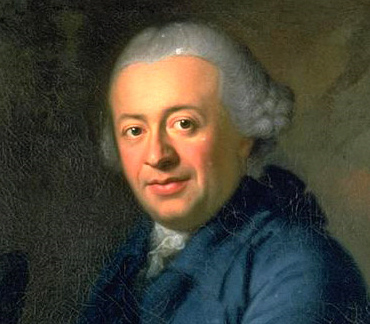 Salomon Gessner's father was a bookseller, publisher and member of the High Council of Zurich. In 1749 Gessner began an apprenticeship in a bookstore in Berlin, which he quit after a year as he wanted to pursue a career as a painter and poet. His first publication "Lied eines Schweizers an sein bewaffnetes Mädchen" (1751) and the painting "Die Nacht" (1753) were of considerable success. His highly appreciated "Idyllen" of 1756 celebrate a golden age in the spirit of 17th-century shepherd romance. Salomon Gessner has made a lasting contribution to landscape painting and etching; his best works include twelve etched landscapes, published in 1770.