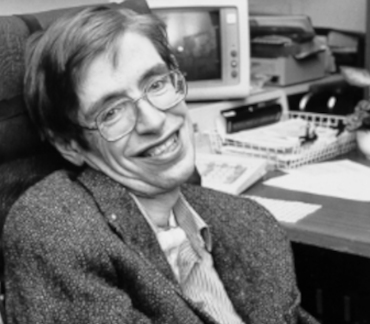 Stephen William Hawking was an English theoretical physicist, cosmologist, and author. Hawking's scientific works included a collaboration with Roger Penrose on gravitational singularity theorems in the framework of general relativity and the prediction that black holes emit radiation. He was the first to set out a theory of cosmology explained by a union of the general theory of relativity and quantum mechanics. Hawking achieved commercial success with several works of popular science, such as "A Brief History of Time" (1988). In 1963, he was diagnosed with amyotrophic lateral sclerosis (ALS), that gradually paralysed him and led to his communicating through a speech-generating device.