Unsophisticated manuscript for private practical use, showing signs of heavy wear and apparently continued until fairly recently (with several modern ballpoint entries). Many postscripts on the flyleaves and empty leaves at the beginning and end (7 and 5 ff., respectively) are written in Maghribi style, suggesting a northern African provenance, but the main text is written in a different style. Sprinkled throughout the ms. are numerous magical squares, some bearing numbers, others words (such as "Allah", "light", "earth", etc.), sometimes both combined. Many quotations from the Qur'an and Islamic scholars. Continued at the end by other hands, with many prayers and invocations. Occult manuscripts are rare in the Islamic tradition, as the official taboo against such items was very strong. 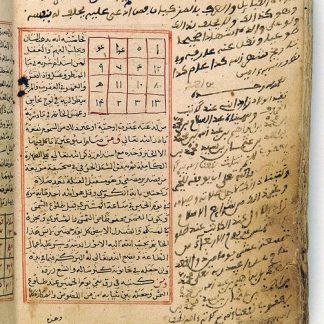