In remarkably good French, to the engineer Pierre-Alexandre Adolphe Jullien, thanking him for his concern about his health, and gives an estimate for the publication date of the forthcoming French edition of The Prairie ("sans doute, pendant le mois d'avril", depending on the industry of the translator and publisher) and he makes some social arrangements in Paris. Cooper had brought his family to Paris the previous year, becoming the centre of a small but influential circle of American expatriots. 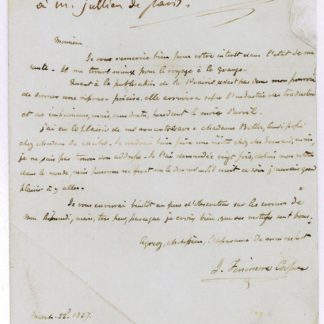