Interesting album containing political caricatures of a high quality, levelled at the state and society of the Third Republic under President Grévy (1879-87). During his term, France underwent strong social and political changes which are immediately reflected in the drawings. Obviously the work of a professional caricaturist, they were probably intended for publication in newspapers and magazines (or may even have been published). Some pictures poke fun at everyday events, others provide a comment on the developments of several months.

Several drawings tipped in; also includes two revised photographs of drawings (a third one is lacking). 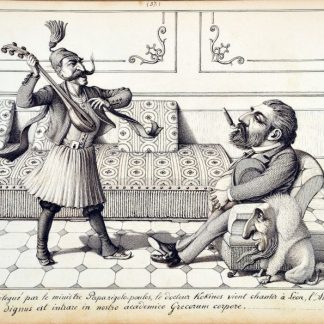