A charming, meticulously drawn, coloured and calligraphed historical atlas created by the young French aristocrat Marie Lichtenstein as a memento of her graduating class at the prestigious Collège Royale in Aix-en-Provence. The historical and genealogical tables are enclosed within red, blue, yellow, and green borders; a small crown is stamped beside the names of rulers . They include the dissolution of the Empire of Charlemagne, the history of the Egyptians, Assyrians, Persians, Macedonians, and Romans, and the genealogies of the European ruling houses, including the "Dynastie Napoléonienne", several of the Byzantine Imperial families, and ultimately, their heirs and successors as Emperor of Constantinople, the Ottoman dynasty. The maps show the "Invasion des Barbares au 5 siècle" (with the "Arabes ou Sarasins" from the "Golfe Arabique" conquering Peria and southern Spain), a map of Europe showing the Empire of Charlemagne, Germany after the Treaty of Westfalia in 1648, and the administrative divisions of contemporary Spain. 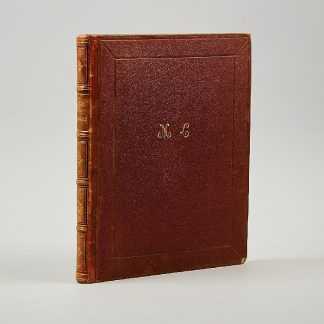