A wheezing Livingstone receives honour in his own land

To Joseph Robertson, Chairman of Hamilton Council, agreeing to attend the forthcoming ceremony to mark his receiving the Freedom of the Borough: "I am sorry to find I am troubled by wheezing today and as I never felt any pleasure in hearing a wheezing speaker and suppose others feel similarly I hope only a few sentences will be expected on the occasion. I am grateful for the kind forethought exhibited in asking few persons to be present [...]".

Light dust-staining overleaf, fol. 2 with Robertson's contemporary endorsement ("Dr Livingstone/ African Traveller"). Together with a printed 8vo admission ticket to the ceremony, and a letter from Robertson to his daughter Ella (2 pp.).

Having only recently returned from Africa, Livingstone was spending Christmas with his mother and family in Hamilton, his father having died that February; Hamilton of course being near Blantyre, his birthplace. The present owner is the great-great-grandson of Joseph Robertson, responsible for conferring the freedom of the borough on him. Given that very few people were invited to the ceremony, it is likely that correspondingly few copies of the invitation, an example of which is included here, were printed. Also accompanying the letter is a later note by Robertson to his daughter, recalling that "At a subsequent Soiree or Conversazione at which I also presided [...] I first suggested that a large district, shewn on the sketch map of his explorations, which he produced, should be called Livingstonia, instead of the more modest name he had adopted [...] The suggestion was received by the very large audience, with Great Cheering". 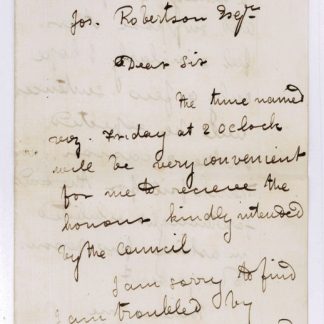