[Algeria & Tunisia]. Manuscript travelogue of a Frenchman, travelling with his parents in Algeria and Tunisia.

The anonymous traveller's journey begins in Paris on 8 March 1890, when the family boards an express train to Avignon in order to visit the old papal city before continuing to Marseille. There the family boards a ship bound for Algiers, where they arrive after a stormy crossing. The journey continues by train and car, leading from Algiers to Constantine, Batna, Tazoult (here called Lambèse), Bikra, Sidi Okba, Tunis, La Goulette, Bizerte, and home to France via Algiers. Additional smaller trips to Blida, Sidi Ferdj, and other places were undertaken from Algiers, where the family spent most of its time. It is likely that the family was connected to the colonial administration, as they spent time with friends in Algiers and other locations.

The writer proves an attentive observer, describing at length the monuments that the family visited, such as the synagogue of Algiers, a Marabout near Algiers, the Roman ruins of Lambaesis near Tazoult, the ruins of Carthage, and the Bardo Museum in Tunis, which had only opened in 1888, different landscapes and also scenes of ordinary life. Many remarks focus on architecture and vegetation, but more intimate remarks on acquaintances and the social life of the French community in Algiers are frequent. Occasionally, the writer's curiosity for the local population, never breaching the social barrier, is at evidence: "We arrived at the customs office where an indigenous man of great beauty carries our luggage [...] Further back some women are talking [...] many of them unveil [...]" (transl.). After another tumultuous passing, the family returned to Paris via Marseille, arriving on 24 April 1890. 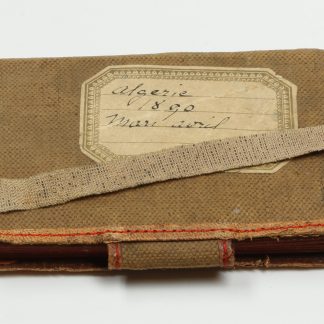 You're viewing: [Algeria & Tunisia]. Manuscript travelogue of a Frenchman, travelling with his parents in Algeria …France, Algeria, and Tunisia, 1890. € 950.00
Add to cart