A seventeenth century horseshoer on the treatment of horses

Remarkable, unpublished hippiatric manuscript, composed in the late 17th century by the Böhlitz blacksmith Christoph Tostlöwe (d. 1699 in Böhlitz-Gundorf near Leipzig) and here presented in a near-contemporary copy prepared only 14 years later by an unknown hand (the initial pages of the present ms. are dated to the early months of the year 1712; the completion of the copy probably required the better part of that year). The ms. begins with a lengthy preface in which the self-confident craftsman justifies his work, demonstrates his familiarity with the Dutch physicians Cornelius Bontekoe and Steven Blankaart, and asserts his competence in the medical field. This is followed by Tostlöwe's wide-ranging treatise on the treatment of the horse, including sections on stomach ailments, enemas, gall disorders, phthisis, afflictons of the eyes, as well as the proper care of the hoof, how to properly cast a horse on its side and tie it down, etc. The end is brought up by a three-page index; the final page shows two woodcuts of horses in battle and flight, removed from a contemporary illustrated Bible.

Tostlöwe was heavily influenced by the Pietist theologians Spener and Francke and was well-connected with the Leipzig Pietist movement. For his heretical views and disputatious activities he was arrested and questioned by the Merseburg consistorium in 1695; his written apology - an outstanding document of a Protestant layman's theological poise in the 17th century - has survived. His self-assured stance in matters theological as well as medical is also evident from the present work, in which he frequently departs into religious similes and parentheses.

A well-preserved and well legible ms., with numerous corrections and revisions by the copyist, prepared within two decades of the original. 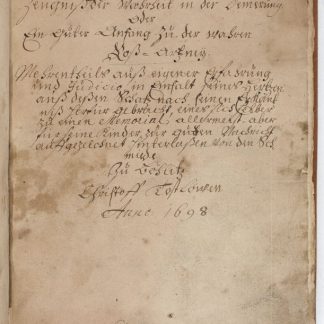