Wellsted, J[ames] R[aymond]. Travels to the City of the Caliphs, along the Shores of the Persian Gulf and the Mediterranean. Including a Voyage to the Coast of Arabia, and a Tour on the Island of Socotra.

Only edition. One of the best English 19th-c. accounts of Arabia and the Gulf. Wellsted's short career was almost entirely devoted to the surveying of the Red Sea, Arabia and Oman, undertaken on a number of expeditions between 1830 and 1837. On board the surveying ship Palinurus he was the first European to set foot in the interior of Oman. Starting late in 1835 from the easternmost point of Oman, Wellsted made his way westward through the Ja`alan region to the Wahibah Sands and then struck north up the Wadi Batha to Samad. There he was joined by Lieutenant F. Whitelock, also of the Indian Navy, who had set out from Muscat later. Together they reached Nazwa, the ancient capital of Oman, and climbed the lower slopes of the Jabal al-Akhdhar, in central Oman. In January 1836 they arrived on the Al-Batinah coast and then turned west, recrossing the Hajar mountains and emerging on the edge of the Dhaharah, the rocky steppe that stretches west toward the Rub` al-Khali. 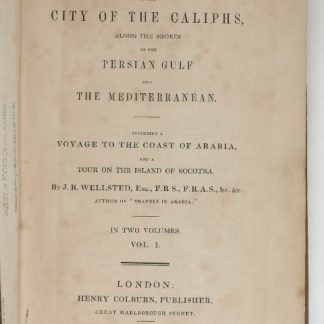