Third edition of the famous "Hieracosophion", the second to contain the third book.

"Celebrated poem on falconry" (Schwerdt), written in Latin hexameters by Jacques-Auguste de Thou (1553-1617), a distinguished and highly erudite French nobleman. "His poem was reprinted by N. Rigault in 'Rei Accipitrariae Scriptores' in 1612 and also translated into Italian [...] De Thou succeeded his father, Christophe, as president of parliament; he was privy councillor to Henry III, and also to Henry IV of France, and keeper of his library. He was not thirty when he composed the elegant verses on hawking, which were probably inspired by the experience he gained of this noble sport during his sojourns at foreign courts" (ibid.). On p. 7, we find "an important note on the various kinds of hawks used for Falconry, with the Latin and French names for them" (Harting). 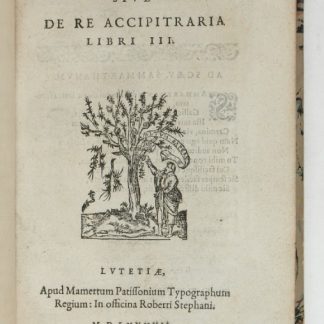