Chronicle of the early history of the Ottoman empire; one of several editions printed in the same year. First published in its French translation in 1577, this work by the Byzantine historian Chalkokondyles (c. 1423-90) was republished frequently throughout the 17th century, always including the account of Ottoman costumes and an interpretation of the seventeen enigmatic illustrations of Byzantine prophecies foretelling the downfall of the Ottoman Empire. The folding plate depicts a bird’s-eye view of Constantinople with its prominent buildings. The chronicle itself is illustrated by numerous portraits of rulers. The costume plates were originally designed for the travel account of Nicolas de Nicolay (1517-83), first published in 1567 (cf. Lipperheide Lb 2), who had visited the Ottoman court as a diplomat in the services of King Henry II.

Hinges and extremeties professionally repaired. Engraved title closely trimmed at top; slight loss to edge of plate showing the Turkish army as well as one costume plate. Occasional brownstaining and edge defects throughout. From the Ottoman collection of the Swiss industrialist Herry W. Schaefer. 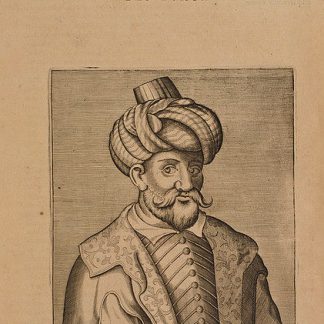