Beautiful French edition of Sir Paul Rycaut‘s famous Turkish chronicle: a page-for-page reprint of the - probably pirated - third edition in French, which had appeared at Amsterdam (under the imprint of Abraham Wolfgangk) in 1670. The 1714 edition, not noted in the relevant bibliographies, omits Rycaut's name, citing only that of the translator, but without the words "traduit de l'Anglois", thus falsely suggesting that the translator Briot is the author. "This work is regarded as one of the best of its kind with respect to the religious and military state of Turkey" (Cox). "[Rycaut's] most important work [...] presents an animated and, on the whole, faithful picture of Turkish manners" (DNB). "Provides an account of the society and political system of the Ottoman Empire with unprecedented thoroughness" (cf. Osterhammel, Die Entzauberung Asiens, 32). "An extremely important and influential work, which provides the fullest account of Ottoman affairs during the 17th century [...] Rycaut was appointed consul in Smyrna, where he resided for eleven years. His information on the Ottoman Empire was taken from several sources: original records, and from a Polish resident of some nineteen years at the Ottoman court" (Blackmer). The attractive engravings depict dignitaries and persons of various ranks in their costumes (several on Arabian horses), also including the illustration of a turban (in the letterpress on p. 115). A beautifully bound copy of a rare and appealingly produced edition. Provenance: removed from the library of the Talhouët family at the Château de la Lambardais in Brittany (armorial stamp to front flyleaf). 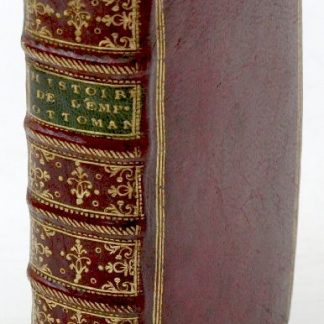