"A scholar’s issue, with 5 prefatory leaves" (Smitskamp): the first of three versions distinguished by Smitskamp of the third edition of the "Rudimenta". As the earlier editions (first: 1620; second, posthumously: 1628), this is printed in the beautiful Arabic type of Savary de Brèves. Erpenius (1584-1624), professor of oriental languages at Leiden, "is one of the men whom the study of oriental languages owes its resurrection [...] He set up his own printing shop with Hebrew, Arabic, Syrian, Ethiopian, and Turkish type" (cf. ADB). Until well into the 19th century his works, published in numerous editions, remained the foundation of Arabic language teaching in the west.

Old ownership of Bernard Marin Bottelko on title and final page (the latter repaired by a former owner). Occasional insignificant browning and waterstaining to margins. 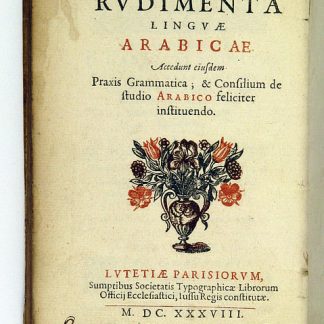