Richardson, John. A dictionary, Persian, Arabic, and English. To which is prefixed a dissertation on the languages, literature, and manners of Eastern nations.

First edition of the first Persian-Arabic-English dictionary, edited by the orientalist Sir John Richardson (1740/41-1795). The first volume includes a dissertation on the languages, literature and manners of Eastern nations. ''An excellent work. As the first vol. or Persian, Arabic and English part was published separately, many more copies were sold than of the second or English, Persian, and Arabic. A few broken sets of the first volume being left, the booksellers were led to reprint several deficient sheets, and so with the copies left on hand of the second vol. they made up some perfect sets. But these are easily known from the original'' (Clarke), as they are printed in London in 1800.

"On 12 November 1767 [Richardson] was proposed for the Society of Antiquaries of London as of Furnival's Inn. In London he pursued both the law and the study of Arabic and Persian. In his oriental interests Richardson was much influenced by another young man, William Jones, who was already coming to be regarded as a prodigy of learning in Asian languages. With the growth of British territorial power in India the potential market for a Persian dictionary had aroused the interest of London publishers and by 1770 Jones and Richardson were working on a new version of Franciscus Meninski's 'Thesaurus linguarum orientalium', first published in 1680-87. Progress was very slow, and Jones withdrew to concentrate on his legal career, leaving the field to Richardson. Thanks to his 'ingenuity and perseverance' (memorial of A. Hamilton and G. Nicol to East India Company, 6 Feb 1776, BL OIOC, E/1/60, no. 26), an abridged version of the original project eventually appeared in two volumes in 1777 and 1780 as A Dictionary, Persian, Arabic and English. Fundamentally revised by others, notably by Charles Wilkins in 1806 and 1810, the dictionary was to have a long life, but although the company took 150 sets, there were few other subscribers and Richardson got little reward for the huge effort he had expended on it" (Marshall).

Bindings rubbed and worn, inner hinges partly split, endpapers renewed. Some staining and marginal repairs to interior; larger tears to 5 leaves, staining to both titles, ownership inscriptions partly inked out; both titles showing central repaired clipping as well as marginal strenghtening and collector's stamp. A large part of both volumes shows worming to gutter; a few leaves with repairs. 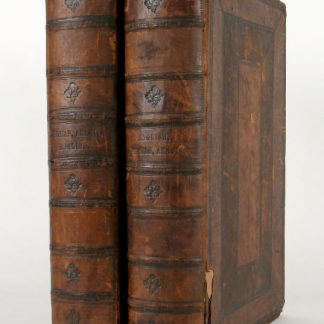