One of the earliest modern studies of Egypt

First English edition of one "of the earliest modern studies of Egypt" (Howgego).

"The first map of the Nile between Cairo and Derr based on autopsy, indicating all locales on the river banks" (cf. Henze). The engravings show views, landscapes, ruins, antiquities, plans, and maps. Plates numbered I through CLIX; plates XVI, XXII and XVII are followed by an unnumbered plate; illustrations CXL/CXLI and CXLII/CXLIII are printed from a single plate; no. CVIII is printed from two separate plates and is not joined to form a single illustration (thus counted as two plates). 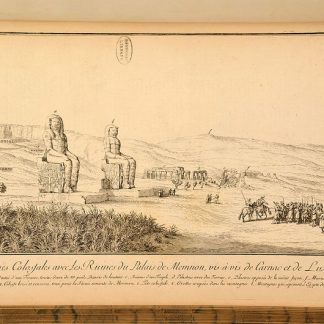