Mostly written to the Belgian socialist politician C. Huysmans, a member of the International Socialist Bureau.

I) 1911: Postcard from Hjalmar Branting, in French.

II) Letter from Tucovic, in German.

We join 5 other doc. incl. 2 letters from Elisée Reclus, 1 from E. Vandervelde and 1 by Huysmans as well as some newspaper clippings or other. 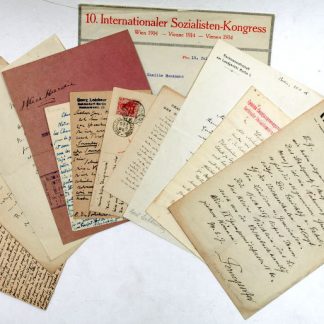