All twelve books of Théodore de Bry's "Petits Voyages", the greatest single collection of material on early voyages to the East Indies and considered unique in its extraordinary wealth of cartographical and visual material on Africa, India, and South Asia. Notably, book seven includes Gasparo Balbi's groundbreaking account of the Middle East, first published in 1590 as "Viaggio dell' Indie Orientali" - a mere 16 years before this present issue, making this the second appearance in print altogether and the first Latin translation. Balbi, a Venetian jewel merchant, travelled extensively in the Arabian Peninsula in search of precious stones. From Venice he sailed for Aleppo, proceeding to Bir and from there overland to Baghdad, descending the Tigris to Basra, where he embarked for India. While in the Persian Gulf, he studied the pearl industry, noting that the best pearls were to be found at Bahrain and Julfar. He refers to islands in the Emirate of Abu Dhabi (including Sir Bani Yas and Das) and to several coastal settlements that were to become permanently established, such as Dubai and Ras al Khaima. Balbi was the first to record the place names along the coast of modern Qatar, the United Arab Emirates and Oman. Practically "none of the names of places on the coast between Qatar and Ras al Khaima occur in other sources before the end of the eighteenth century" (Slot).

A composite set, nine books in their first, the remaining three in their second edition. As several of the travellers were Protestants and their works banned by the Catholic church, this set was censored by the Spanish inquisition of Granada in 1708 (cf. vol. II, verso of title). Condemned authors are identified on the title pages, and various passages considered too crude or suggestive have been stricken out or obliterated. In vol. X, a marginal note on p. 27 attempts to refute an account denouncing the cruelty of the Spanish in America.

Last in the library of Jean-Paul Morin, with his bookplate on the first flyleaf. Rather browned throughout, with occasional slight edge defects; two title pages are repaired. Wants a total of 11 plates, as well as the appendix on the Congo in vol. II and the Notice to the Reader in vol. IV. Balbi's section is complete and well preserved, with only two minor censorship marks. The only comparable copy in recent trade history is the Macclesfield set in contemporary gilt calfskin, auctioned off at Sotheby's in 2007 and currently offered by a U.S. dealer consortium for $150,000: that copy, however, is incomplete, wanting the final volumes XI and XII - the latter of which is "so rare that even Church lacked much of the text". 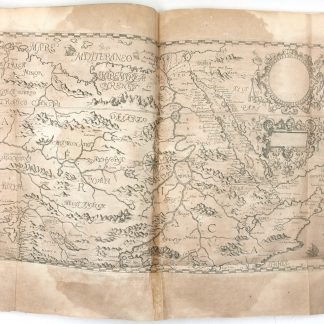