HH Sheikh Hamad ibn Isa Al Khalifa, KCIE, CSI (1872-1942) was the King (Hakim) of Bahrain from 1923 until his death. Throughout the 1920s and 1930s, his palace in Al-Sakhir was a centre where both Gulf Sheikhs and British nobility and political figureheads were regularly invited to dine and discuss foreign policy of the region. The photograph shows the monarch in a deck chair on a ship in the company of noble retainers. The caption reads "Sheikh Hamad. Ruler of group of Islands Persian Gulf". 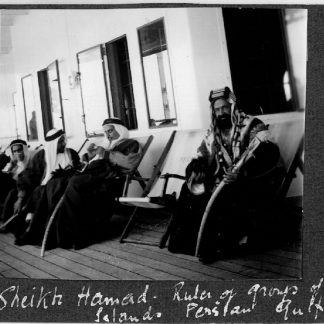