An archive of 183 photographs: 133 loose b/w photos (ca. 30 x 25 cm), 30 smaller photos (ca. 5 x 6 cm) numbered and mounted together on a single sheet of paper, and 20 photos in the album. Original black half morocco, with green cloth sides with title and emblem of Pakistan's United Bank Limited on upper board. Includes numerous rolls of original medium format negatives.

A trove of unpublished photographs depicting two official visits to Pakistan by HH Sheikh Zayed bin Sultan Al Nahyan. The earlier one, in 1967, is documented by a separate photo album containing images of the visit to Lahore, the second largest city of Pakistan, between 16 and 28 November 1967. (Almost 20 years later, in 1986, Sheikh Zayed would donate a hospital to the city, now the "Shaikh Zayed Medical Complex", which is one of the premier medical institutions in the country.) The album opens with a picture of HH Sheikh Zayed arriving in his car; later pictures show him being honoured and presented with an album very similar to the present one, and in the company of officials representing Pakistan's UBL bank (United Bank Limited).

The 30 small photographs show an audience with Sheikh Zayed as well as a banquet in his honour, attended by various Pakistani dignitaries including Agha Hasan Abedi (1922-95), the illustrious founder of UBL. These photos, apparently clipped from a set of medium format contact prints, are mounted on a sheet of coated black photographic paper.

The largest set in size and number shows the state visit that took place on 20-22 January 1970 at the invitation of President Yahya Khan (1917-80). It provides extensive documentation of how the large Abu Dhabi delegation is formally received by Yahya Khan, who served as president of Pakistan between March 1969 and December 1971. Many show HH Sheikh Zayed shaking hands with and speaking to President Yahya; others show the airport reception, formal dinners, speeches, but also informal conversations, members of the delegation handling falcons, and numerous high-ranking Abu Dhabi retainers. Among the persons depicted is again Agha Hasan Abedi, but there are also several pictures of Butti Bin Bishr, secretary to Sheikh Zayed, and of Ahmed Bin Khalifa Al Suwaidi, the first Minister of Foreign Affairs of the UAE and the Personal Representative of Sheikh Zayed.

President Yahya Khan had been "one of the very first international leaders to reach out to Sheikh Zayed after the UAE had been founded and had, prior to this, in July 1970, been instrumental in creating an agreement to provide technical assistance to the then Trucial States. With the December 1971 union agreement approaching, Pakistan was quick to forge even closer ties, and Khan had been one of the first foreign leaders to offer his congratulations and reiterate his country's support when the UAE was born. Full diplomatic ties were then quickly established, and Pakistan became one of the first to extend recognition to the new country [...] All his life Sheikh Zayed had held a personal affinity for Pakistan. He had hunted there extensively, came to know the people, its culture and lands, and enjoyed close ties with leaders" (Wilson).

Binding of the album slightly rubbed. Some of the loose photographs slightly scuffed along the edges, occasional nicks or slight tears, but on the whole in excellent state of preservation. The majority of the photographs are entirely unmarked, save for the odd Arabic inscription or stamp on the reverse. A fine, unpublished set, entirely unknown and without counterparts in the UAEhistory, Keystone or Hulton/Getty press photo archives. From the estate of Azhar Abbas Hashmi (1940-2016), Pakistani financial manager and eminent literary patron with close ties to Karachi University. Long with UBL, Hashmi would serve as the bank's vice-president before founding several important cultural organisations and becoming known as a man of letters in his own right. It was because of Hashmi’s close connections to the Gulf states that Abu Dhabi provided funds to build the Karachi University’s faculty of Islamic studies, along with Sheikh Zayed Islamic Centre and Jamiya Masjid Ibrahi. 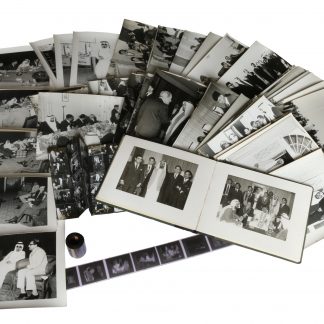