Payment receipt for the final installment for one of the earliest works in British printing history published by subscription: “Received this second day of May in the year of our Lord God 1664 of John Gill Esquire the summe of twenty shillings being the full intire payment of four pounds by him Subscribed or Promised towards the Printing of a Lexicon and Grammars of the Orientall Languages: Witnesse my hand and seal, the day and yeare above written [...]”. The receipt is filled in and signed by the theologian and Semitic scholar Dr. Edmund Castell, and the work subscribed is Castell’s life-work, the ‘Lexicon Heptaglotton’. Upon this work, “which has long challenged the admiration, and defied the competition, of foreigners; and which [...] has raised an eternal monument of literary fame” (Dibdin I, 34), Castell had been at work since 1651; it was published in two folio volumes in 1669, five years after Gill completed his payment and twelve years after the publication of Brian Walton’s six-volume polyglot Bible edition, in the preparation of which Castell had been a valuable help and to which the ‘Lexicon’ was issued as a supplement. In his DNB article on Castell, the orientalist and historian Stanley Lane-Poole recounts the story of the Lexicon’s composition, told with “sad simplicity” in the dedication to Charles II: “The eighteenth year of composition, he writes, has been reached, and that long period has been filled with unremitting toil of seldom less than sixteen or eighteen hours a day, with constant vigils, with bodily suffering [...], with loss of fortune, and finally all but the loss of sight. [...] He had scarcely any assistance. [...] He mentions three scholars who rendered him more protracted service, but these deserted him at last, even his printer mutinied, and he was left alone in his old age to finish the gigantic work. One of his assistants suddenly died, and Castell had to pay for his burial, and took charge of his orphan child. He had not only spent his life and strength; he had reduced himself to poverty by expending over 12,000 £ upon the work; and even so, he was 1,800 £ in debt, and had become responsible for some debts of his brother, for which the unfortunate scholar was sent to prison in 1667. This condition of actual distress, aggravated by the loss of much of his library and effects in the great fire, [...] at length procured him a scanty measure of royal favour. [...] Castell brought out his ‘Lexicon’ in 1669. It marks an epoch in Semitic scholarship [...], but [...] met with a deplorably cold welcome in England. The ‘London Gazette’ contains an advertisement in which the unhappy scholar states that for three-quarters of a year he or his servants have attended in London at the place of sale, but that the subscribers send so slowly for their copies that he must fix the following Lady-day as the last date of attendance. At the time of his death about five hundred copies still remained unsold, and his niece and executrix, Mrs. Crisp, lodged the remnant of her uncle’s life-work in one of her tenant’s houses at Martin in Surrey, where for some years the rats played such havoc with the learned pages that when the stock came to be examined scarcely a single copy could be made up from the wreck of the sheets, and the fragments were sold for the sum of 7 £” (III, 1180f.). 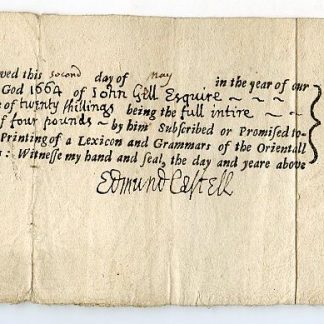 You're viewing: [Subscription receipt for the Lexicon heptaglotton]. Printed blank form completed in ink and signed by Edmund Castell (Semitic …London, 2 May 1664. € 2,500.00
Add to cart