The invention of America

A lovely set, exquisitely and uniformly bound, magnificently restored in the most gentle and respectful of manners, of the entire original run of De Bry's "Great American Voyages" (supplied by extra variant copies of volumes IV and VIII), the magnificent work that is responsible for shaping the European image of the New World, inventing it in the minds of the masses. Presenting a broad view of European conquests in America and the first contact with the American Indians, De Bry's Great American Voyages represents the first attempt to introduce in Europe - and on a large scale - a pictorial image of the New World as a whole. With it, the first iconography of the American Indian had been created, and most Europeans glimpsed for the first time the wonders of the New World in the illustrations present here. For more than a century, the European view of the New World was dominated by the present work. Theodor de Bry himself published the first six parts (in German and Latin simultaneously), and after his death, his widow and his two sons issued the three following parts. "It appears that they intended to stop there" (Sabin III, 20). However, 17 years later, Johann Theodor decided to publish another three volumes (1619-24). These are not present here. The present set is a mix of the German and Latin volumes (which appeared simultaneously), and as always in a mix of editions and issues. Due to the great scarcity as well as the complex bibliographical nature of "The Great American Voyages", no sets of this great work are said to be alike. They are always made up of different languages, editions, and issues, and there is said to be no such thing as a "complete set". Copies of sets are almost always in very poor condition.

With the book plate of John Jay Paul (dated 1913 and 1914) to each volume, and each volume with a tipped-in manuscript note describing issue points and/or the main restoration work (one dated 1919).

Gentle washing, pressing, and a few restorations; some maps neatly mounted, 2 maps supplied in facsimile (being the map in both copies of vol. VIII, which is not always present and thus technically not lacking), and a few leaves supposedly supplied from other copies. Occasional slight cropping. All in all a very handsome and well preserved copy. 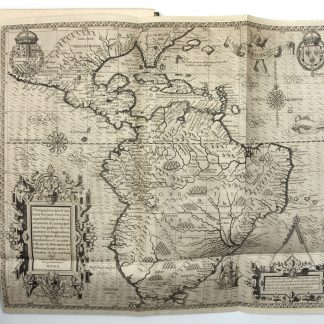