Extremely rare sole edition of this account of the Niebuhr expedition to Arabia in the 1760s. Produced as a cheaper alternative to the hefty 3-volume sets which appeared in German, Danish, French, and other languages, the present work was printed by the Royal press and gives a summary of the journey intended for a popular audience. Swedish interest in the expedition was elicited by the presence of the Swedish botanist and explorer Peter Forsskål in Niebuhr's caravan. After studying Arabic dialects, Forsskål was the first to scientifically describe many plants of the Arabian Peninsula, before dying in Yemen of malaria in 1763.

The plates, modeled after those of the German edition of 1772, depict a Turkish Pilgrim to Mecca; an Arab woman in a hijab, with an inset detail of a burkha; an Arab farm-girl from the 'Coffee Mountains' of southern Arabia; and an Arab nobleman of Yemen. 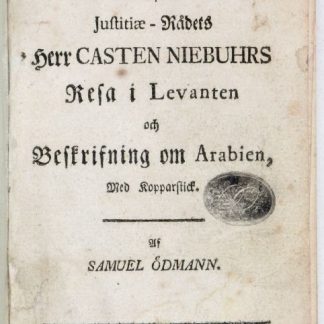