Efforts on behalf of the Arabic language and culture

Folio (250 x 305 mm). 6 vols. of Works, 3 vols. of Supplements, vol. 3 being: The Memoirs of the Life, Writings, and Correspondence, of Sir William Jones, by Lord Teignmouth. A total of 9 vols. with 2 portraits and 84 plates (some folding). Splendidly bound in contemporary, uniform gilt tree calf, spines gilt in compartments with black spine labels.

While serving as a judge of the high court at Calcutta, the British orientalist Sir William Jones (1746-94) became a student of ancient India and founded the Asiatic Society of Bengal. He is best known for his famous proposition that the Indo-European languages sprang from a common source and were genetically related - a suggestion soon to be proved by the linguist Franz Bopp. By the end of his life, Jones had learned 28 languages, including Arabic and Chinese, often by teaching himself. His scholarship helped to generate widespread interest in Eastern history, language and culture, and it led to new directions in linguistic research. Among his many efforts on behalf of the Arabic language and culture are his "Discourse on the Arabs" (I, 35 ff.), his discussion of Arabic idyllic poetry (II, 390 ff.) and Arabic poets in general (II, 587 ff.), his edition of an Arabic elegy by Mi'r Muhammed Husain, offered as an specimen of Arabic in his essay "On the orthography of Arabick words" (I, 212 ff., with plates III and V), as well as his edition of "The Mahomedan Law of Succession to the Property of Intestates in Arabick, Engraved on Copper Plates" (III, 467 ff.) and his study "On the introduction of Arabick into Persian" (Suppl. I, 251 ff.). 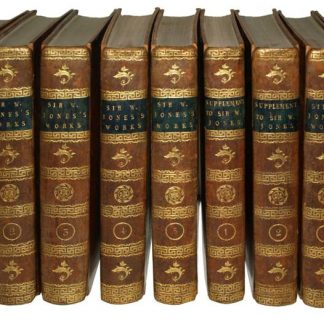