First edition in French of two Arabic travels to China and India. The text was translated from the Arabic by the French orientalist and professor Joseph Toussaint Reinaud (1795-1867). The Arabic text was first printed in 1811, under supervision of the French linguist and orientalist Louis-Mathieu Langlès.

The first volume starts with an introduction to the text, followed by the translation. The main text can be divided into two sections. The first account is based on statement from a merchant called Suleyman, who is said to have travelled to India and China in the years 851-852 (237), however, the actual author of the text is unknown. The following account is written down by Abu Zayd al-Hasan al-Sirafi. Al-Mas'udi, "the Herodotus of the Arabs", mentions al-Sirafi in one of his works, stating that he met him in the year 915-916 (303) in Basra, Iraq. Al-Sirafi tells us he was commanded to verify and extend the earlier account. The date of the second account is unclear, but it was probably written in the first half of the 10th century. The text gives a lively account of the life in China and India, with "… the first foreign descriptions of tea and porcelain, and a whole panorama of Chinese society, from the Son of Heaven and Confucian ethics down to toilet paper and bamboo urinals" (Mackintosh-Smith). The second volume gives notes to the translation, followed by the Arabic text. Added to the Arabic text are two extracts from works by Al-Mas'udi, including his "Muruj al-dhahab".

With owner's inscription on title-page. Sides slightly rubbed. A very good copy: only some minor browning. 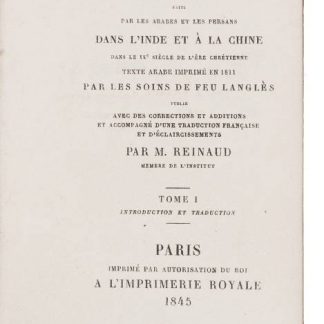