Heine's short, self-ironic poem "Das Glück ist eine leichte Dirne", probably written between 1848 and 1851 and published in 1851 in his late collection "Romanzero": an unknown version, departing from the published text, penned as a dedication for Marie Buloz, who had visited the ailing poet on 19 March 1853 with her husband François, editor of the "Revue des Deux Mondes". Beside the German text (in ink) Heine has pencilled a French translation. A remarkable document from Heine's final years in what he called his "mattress tomb", during which writing, especially with pen and ink, cost him the greatest of efforts and he almost entirely limited himself to the use of the pencil. The album leaf was considered lost and was known to scholarship through an incomplete manuscript copy of the French translation only (by an unidentified scribe) in the Spoelberch de Loevenjoul collection, Musée de Chantilly, on which all critical editions base their text.

Occasional slight smudging to pencil; a small trace of red ink near the German text. 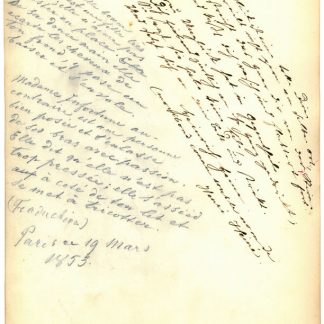