The second edition in English, by the greatest translator of the Elizabethan age

Plinius Secundus, Gaius (Pliny the Elder). The Historie of the World, commonly called the Naturall Historie.

Pliny's renowned Natural History in its second publication in English (repeating, with corrections, the 1601 first publication), translated by Philemon Holland, the greatest translator of the Elizabethan age. The "Naturalis Historia" is one of the largest single works to have survived from the Roman empire to the modern day and purports to cover the entire field of ancient knowledge, based on the best authorities available to the author. Pliny claims to be the only Roman ever to have undertaken such a work. It comprised 37 books in 10 volumes and covered over 20.000 facts on topics including the fields of botany, zoology, astronomy, geology and mineralogy as well as the exploitation of those resources. It remains a standard work for the Roman period and the advances in technology and understanding of natural phenomena at the time. Some technical advances he discusses are the only sources for those inventions, such as hushing in mining technology or the use of water mills for crushing or grinding corn. Much of what he wrote about has been confirmed by archaeology. "We know from Pliny that there were important pearl fisheries in the Gulf [...] Pliny identifies Tylos (Bahrain) as a place famous for its pearls [... He] attests that pearls were the most highly rated valuable in Roman society, and that those from the Gulf were specially praised [...] The pearl related finds at the site of El-Dur indicate the site was integrated into the maritime trade routes linking the Roman Empire, the Persian Empire, India and South Arabia" (Carter). Book 6 holds a chapter that gives the first detailed account of the regions around the Gulf, including what are now Qatar, the Emirates and Oman.

Binding rubbed; front hinge splitting. Includes the final printed leaf in vol. 2, containing the publisher's advertisement to the reader that all errors have been corrected in the present edition and the errata leaf (included in the same position in 1601) has become unnecessary rather than having been mistakenly omitted. Some slight browning and brownstaining, but an excellent copy removed in 1973 from the Royal Meteorological Society (Symons Bequest, 1900) with their bookplate on the front pastedown. 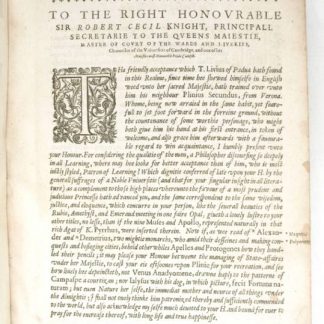 You're viewing: Plinius Secundus, Gaius (Pliny the Elder). The Historie of the World, commonly called the Naturall Historie.London, 1634. € 15,000.00
Add to cart