The King's Strabo: the Arabian Gulf, and all the country of the tent-dwellers and the Sheikh-governed tribes

Enlarged and corrected second edition ("much more accurate and splendid than the first", says Dibdin) of Strabo’s "Geography", one of the earliest and most important scientific treatises of historical geography. Contains the Greek text beside Xylander's Latin translation, with commentaries by Frédéric Morel and Isaac Casaubon. Together with the works of Ptolemy and Solinus, Strabo's "Geography" constitutes the first attempt at a unified treatise of geographical knowledge. Strabo had visited Egypt and sailed up the Nile in 25 BC. Even in the introductory chapters, the author provides important details on the Arabian Peninsula: "Adjoining the Ethiopians, a needy and nomad race, is Arabia: one part of which is distinguished above all other lands by the title of Felix [i.e., Hedjaz and Nejd-ed-Ared], and the other, though not dignified by that name, is both generally believed and also said to be pre-eminently blessed. Though Homer knew of Arabia Felix, at that time it was by no means wealthy, but a wild country, the inhabitants of which dwelt for the most part in tents. It is only a small district which produces the aromatics from which the whole territory afterwards received its name, owing to the rarity of the commodity amongst us, and the value set upon it. That the Arabians are now flourishing and wealthy is due to their vast and extended trade" (bk. 1, p. 39); "Arabia Felix is bounded by the entire Arabian and Persian Gulfs, together with all the country of the tent-dwellers and the Sheikh-governed tribes. [...] Beside the ocean the country is tolerably fitted for habitation of man, but not so the centre of the country: this for the most part is barren, rugged sand desert. The same applies to the country of the Troglodytic Arabians and the part occupied by the fish-eating tribes" (bk. 2, p. 130f.). Furthermore, books 15 and 16 are devoted entirely to the Orient (bk. 16 is on Arabia in particular), while the final book 17 discusses Egypt and Libya.

The personal copy of Louis XIII, King of France (1601-43), magnificently bound for him with his arms and monogram. Later in the Jesuit College, Paris (inscription on title page); in 1624 awarded to the scholar Robert Roussel, College de Clermont, Jesuit College of Paris, as a prize for eloquence in Greek (inscription on preliminary blank). A faint, unidentified stamp on the title page; stamp of the Bibliothèque Publique of Alençon on J2 and final leaf.

Slight edge defect to upper margin of QQq3, affecting a few letters of the headline. A few marginal abrasions to the binding's edges professionally repaired. 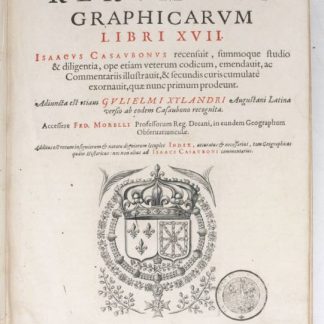