Authoritative history of the Portuguese missions in Ethiopia and Arabia, with a folding map

Tellez (Telles), Balthasar. The travels of the Jesuits in Ethiopia: containing [...] travels in Arabia Felix, wherein many things of that country [...] are treated of, as a particular description of Aden, Moca, and several other places [...].

4to. (4), 264, (16) pp. With engraved map of Ethiopia, including part of the Red Sea and the source of the Blue Nile. Modern calf, gold-tooled spine, with red morocco title-label, and the sides blind-tooled in a panel design.

Rare first English edition of Tellez's influential historical account of Ethiopia and Arabia. It is a digest of the accounts of all the Jesuit travellers to Ethiopia and Arabia, including Paez, De Montserrat, Almeida, Lobo and Mendes. It includes an account of the travels of the Jesuit missionaries Pédro Paez and Antonio de Montserrate, who were captured off the Kuria Muria islands on a mission from Goa to Ethiopia in 1590 and subsequently taken to Yemen, where they were held captive until 1596. After being sent to San'a by way of Melkis and the Wadi Hadramaut, then after three years taken to Al Mukha (Mocha), where they were forced to serve as galley slaves, they were finally ransomed in 1596 and returned to India. Paez discovered the source of the Blue Nile and is said to have been the first European to have tasted coffee in Al Mukha.

The work further includes a detailed description of Aden (Yemen) as well as of the Ethiopia-Adal War (1529-43), during which Ahmad ibn Ibrahim al-Ghazi led several expeditions against the Ethiopian emperor until most of Ethiopia came under the power of the Muslim Sultanate of Adal. The present English edition is based Almeida's "Historia geral de Ethiopia a alta" (1660), edited by Tellez.

With early owner's inscription ("W. G. Patchell") on title-page. Quires 2D and 2E transposed; a couple of millimetres shaved off the outer border of the map; a faint waterstain throughout; some leaves foxed and some occasional spots. A good copy. 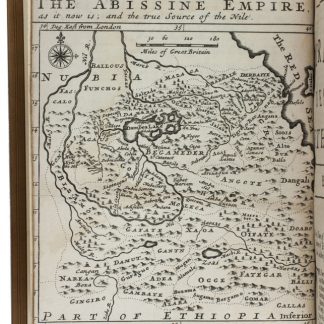