Only edition of this rare, secret Naval Intelligence Handbook, compiled by D. G. Hogarth, Keeper of Antiquities at the Ashmolean Museum, Oxford (and close friend of T. E. Lawrence) for the British Admiralty's new Naval Intelligence Division, intended for the exclusive use of British officers operating on the Arabian Peninsula during the Great War. Although the information contained was classified as confidential, it could "in certain cases be communicated to persons in H.M. Service below the rank of commissioned officer", though officers exercising this power were warned to impart such data only with "due caution and reserve". As the introductory "Note" informs the reader, "The sources from which this work has been compiled include native information obtained since the outbreak of the war [...] Separate chapters are devoted to each of the great districts of Arabia [...] After the area of the territory under review has been defined, its physical character is described unter the subsections of Relief and Climate. Then follow social and political surveys of the district, the former usually arranged under the sub-headings of Population, Life and Appliances, Products and Trade, Currency, and Weights and Measurements, the latter describing the system of Government, Recent History, and Present Politics. The last section of such a chapter is purely geographical and is devoted to the Districts of the territory [...] In a composite chapter, such as that on the Gulf Coast, dealing with several independent territories, the same general arrangement, when practicable, has been followed for each area [...] The plates at the end of each volume have been chosen to illustrate the varieties of country which are characteristic of Arabia". The second volume is devoted "mainly to detailed routes, preceded by two chapters on methods of transport and lines of communication [...] Chapters have been incorporated on Meteorological Observations, Hygiene and Disease, and Vocabularies". All four maps of the first volume (Districts and Town; Orographical Features; Land Surface Features; Tribal Map) are present as called for; the "Key Map of Routes" in the second volume has been replaced by an orographical map of Palestine and Trans-Jordan (1933). While the first volume (I. D. 1128) has been rebound to style (lacking the half-title noting the confidential character of all information contained), the second volume (C. B. 405) is preserved in its original binding as issued, bearing also the copy number "Copy 117" in gilt on the upper cover. A Note of Confidentiality calls attention to "the penalties attaching to any infraction of the Offical Secrets Act". Stamps on flyleaf and pastedown trace its provenance to the Royal Central Asian Society, founded in 1901, and the book remained on the shelf of that Society's secretary when it was renamed the "Royal Society for Asian Affairs" in 1975. This ownership is cancelled in ballpoint, with a note "Sold to Mr. M. Graham" (i.e., Murray Graham, British collector and exploration agent in Arabia, d. 2008). Acquired from UK trade. 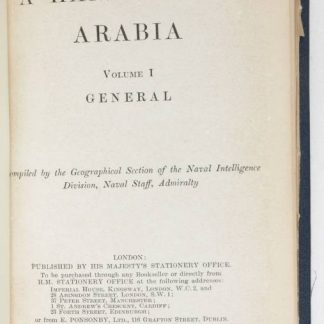