Original watercolours of the Austro-Hungarian Empire

[Austria-Hungary]. An album of watercolours of military scenes and soldiers in uniform.

Folio. 85 large watercolours (200 to 255 mm x 280 to 360 mm). Mounted on laid paper sheets; each watercolour captioned in German and numbered (not in sequence) at foot. Early 20th century half calf over green roan, spine in compartments, gilt lettering.

An extraordinary collection of original watercolours, apparently unpublished, celebrating the creation of the Austro-Hungarian Empire through various military episodes, as well as the uniforms of the various nations and regiments involved. The events depicted span the 1750s to the 1850s and include scenes from the Battle of Wagram, the skirmish at the Spinnerin am Kreuz near Vienna, and the rebellion in Transylvania (Siebenbürgen). Officers in uniform from every corner of the Empire are shown: Hungarians, Austrians, Poles, Czechs, Croats, Dalmatians, and Bosnians, with a few examples of local militias and foreign army regiments such as the Prussians, French, Turkish, Russians and British ("Scottish Grenadiers at Waterloo"). While the uniforms are described in great detail, with vivid and bright colouring, the overall style is naïve, with facial expressions and poses sometimes caricaturesque and even grotesque, reminiscent of the celebrated prints by the French "Imagerie d'Épinal". The numbers at the foot of each image, which in some instances exceed 500, suggest that the present selection was assembled from a larger collection, probably prepared for a publication that was never realised. 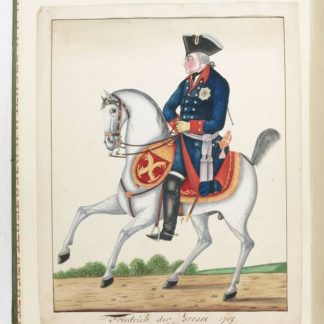 You're viewing: [Austria-Hungary]. An album of watercolours of military scenes and soldiers in uniform.Germany or Austria, ca. 1870. € 35,000.00
Add to cart