Unique: deluxe copy from the collection of the wealthiest man in the Habsburg monarchy

Unique copy of one of the rarest works of zoological book illustration, from the library of the banker, art collector, and patron Moritz von Fries (1777-1826), for whom the set was in all likelihood specially produced. Around 1800, Fries was considered without doubt the richest man in the Habsburg monarchy. The splendid engraved plates were elaborately illuminated, each with rich botanical and architectural decoration extending even beyond the engraved matter. In addition, the copy at hand was enhanced by 15 original watercolours (all in vols. 5 and 6), whereas the regular copies include merely prints. The only verifiable complete copies, in the Austrian National Library (ÖNB) and the Bavarian State Library (BSB), show less splendid decoration, with only three watercolours each in the respective volumes and no watercolour borders whatsoever. The Fideicommissum collection in the ÖNB holds 5 illuminated volumes of Spalowsky's work, with volume 5 containing the highest traceable number of watercolours among all copies available for comparison. As the final volume is lacking in the Fideicommissum collection, the eight watercolours and splendid framings of vol. 6 of Fries's copy are probably unique.

Since 1932, the only copies traceable at auction were those at Ketterer, 2017 (vols. 1-4) and Christie's, 2012 (vols. 1-3). The volumes sold in 2017, along with the ones at the ÖNB and BSB, belong to the normal edition without the watercolour embellishment and the artist's colouring, while the copy sold at Christie's would seem to have been at least comparable to Fries's in respect to its décor. However, neither the Christie's copy nor any of the others discussed above include any original watercolours, which are to be found in that of Fries's alone.

The splendid avian illustrations surrounded by landscape motifs and architectural decoration are labelled in red ink, identifying the animals' German and scientific names. The labelling is sometimes overpainted, suggesting that the decision to extend the watercolour décor was made at a later stage. The engravings were produced by five artists, among which were Benedikt Piringer and Sámuel Czetter. In vol. 5 of the Fideicommissum copy, Piringer signed one of the watercolours, proving that he provided templates for the engravers and contributed to the colouring.

Spalowsky's "Naturgeschichte der Vögel" was planned as part of a large natural history publication. In a subscription announcement from 1791 the surgeon and army physician advertised the plates showing species "previously not illustrated by any author" and promises the vivid, realistic colour "of the originals". A large proportion of the species depicted, including four falcons, originate from Asia, mostly from India and China, and are not to be found in Brisson's or Buffon's works. The present copy constitutes a special edition of the most expensive version of decoration, priced at 36 guilders - 15 times the cost of the plainest version. The eventual failure of this ambitious project was undoubtedly due not alone to the author's untimely death in 1797, although Spalowsky did succeed in wooing several prominent dedicatees for his elaborate publication. The "Naturgeschichte der Vögel" is dedicated to Alois I Joseph von Liechtenstein and Caroline von Manderscheid-Blankenheim (vol. 1), Beethoven's patron Franz Joseph Maximilian von Lobkowitz and Caroline Theresa von Schwarzenberg (vol. 4), Wenzel count Paar and Maria Antonia Princess Liechtenstein (vol. 5), as well as Anton Theodor von Colloredo-Waldsee-Mels, archbishop of Olmütz (vol. 6). 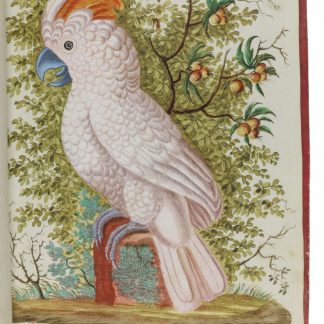