A splendid leaf from the "Rosenkavalier"

Hofmannsthal's early draught for the lovers' duet between Sophie and Octavian, from Act II of the "Rosenkavalier", after the silver rose is presented: both lovers sing twelve lines each which oppose and yet complement each other: "Sophie. Dahin muss ich zurück / Dahin und müsst ich völlig sterben auf dem Weg [...]".

"Octavian. Ich war ein Bub / Wars gestern oder wars vor einer Ewigkeit [...]". As evidenced by the caption, this is the "addendum to page 6" (of the libretto) which Richard Strauss had requested and Hofmannsthal had supplied with his letter of June 26. It was used for the final version of the opera, albeit in an abridged and revised form. The present text corresponds to the suggestions which Strauss made in his letter to Hofmannsthal written on July 9, 1909 for a revised version of Act II.

A precious document of the collaboration between Strauss and Hofmannsthal on what remains one of the most successful operas of the 20th century.

Provenance: from the collection of Strauss's biographer Willy Schuh. 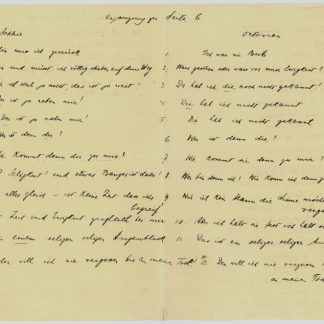