First edition of the author's principal work, very rare, especially with the engraved title. The book mostly discusses the Philippines and the Moluccas, but also deals with China, Java, Sumatra, and Ceylon, with references to "los estrechos Persico y Arabico" (p. 12). The Portuguese naval commander Afonso de Albuquerque had conquered Malacca in the early 16th century, several decades after Arab merchants had introduced Islam to the islands.

"Few narratives are written with so much judgment and elegance [...] One of the most important works for the history of the Philippine islands [...] The book also contains matter relating to Sir Francis Drake and American voyages, and to the history of Spanish and Portuguese exploration in the Indies" (Cox). "Very lucidly and elegantly written" (cf. Ebert). "Copies with the engraved title are rare, and still more difficult to find are copies in which the printer's name and date of printing are preserved at its bottom" (cf. Salvá). "For the compilation of this work, the author had the command of all authentic manuscript relations, which were either in official custody, or in private hands, besides the testimony of such persons then living as had been eyewitnesses to any part of what he delivers" (Griffin).

Boards somewhat worn and rubbed, a few spots, some small cracks in the joints, slight defects at head and foot of spine, but altogether a beautifully preserved copy. Final leaf laid down, some small, inconspicuously repaired wormholes near headlines. Some occasional foxing and browning; pages 65-68 with a remargined flaw at the edge (no loss to text). Provenance: Engraved bookplate of Jeremiah Hill (early 18th century). Later in the famous library of Sir Thomas Phillips (1792-1872, with shelfmark and inscription "MHC" in pencil). Sold at Sotheby's June 23, 1988 for £3,800 (lot 110); latterly in the private collection of the Swedish antiquarian bookdealer Björn Löwendahl (1941-2013). 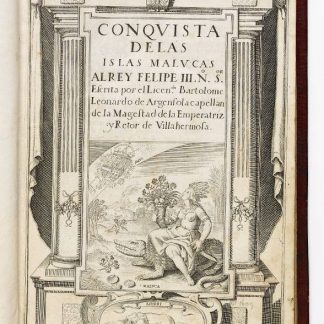