Early Monograph on the Female Breast

4to. 32 pp. With a woodcut title vignette, headpieces and initials. Papered spine. Edges sprinkled in red.

Very rare anatomical dissertation on female breasts, constituting one of the first monographs on the subject. F. W. Mencel (1697-1773) had not only studied medicine, but also mathematics and physics; he would later serve as physician in his native Magdeburg as well as draw maps and architectural elevations in Prussia before going on to teach medicine in Halle and Zerbst (cf. Jöcher/A.).

In his introduction, the author states that humans at various ages favour different foods, but only at the youngest age can they draw nutrition from the human body alone, "for which purpose the female sex has been given two peculiar organs, which rise as prominences from the chests of young women and have been referred to by anatomists under the name of 'mammae', 'breasts', providing nourishment, called 'milk', to the tenderest of beings. These organs (as such) have not been hitherto dealt with frequently," for which reason he has chosen them as the subject of his thesis. Mencel elaborates on the classical derivation of the term 'mamma' before giving a description of the mammary glands, their different appearance in males and females, and their locale on the body. The author notes that there are usually two such glands, one right, the other opposite, on the left. The reason for this, says Mencel, is both functional and aesthetic: "for one thing, it is prettier that way, and for another, if one of them is injured or cannot produce sufficient milk, the other will serve" (p. 9). He goes on to discuss the varying size, shape, colour, and tissue density of breasts, "not the same in all women, but subject to their age, temper, and region": they develop some time before the first menstrual cycle, then expand (supposedly being bigger among married women than virgins), and are at their largest among pregnant women shortly before childbirth, while they tend to sag among the elderly - and even more so among the women of India and Senegal, where they are reported to droop to the stomach. Even in Europe, however, there are areas (says Mencel) where girls are so well-endowed that their breasts resemble pillows, indeed not little hills but enormous mountains. Mencel points out how it has often been observed that women with large breasts are more libidinous and more exposed to venereal disease, a fact reflective of the adage that "every excess turns into vice" (p. 11), then adds anecdotes about unusually buxom women from Utrecht, Elsinore and other places. Proceeding into anatomy proper, Mencel discusses the veins, arteries and nerves throughout the mammary glands, the milk ducts, and the nipples. Another chapter discusses the movement of the breasts during breathing, their "rise and subsequent fall, alternatingly, as we can observe in girls every day". The reason, he adds, "is not hard to guess, for as the breasts are situated on the thorax, so inhaling causes them to expand, and exhaling to constrict themselves", noting the health risks (including lung constriction) involved in the custom of breast binding (p. 26). After a final discussion of the human milk and lactation, Mencel concludes that much could be added on the subject, in particular about the inflammation of the breast, growths, breast cancer, excessive lactation, breast defects, and similar conditions, but his dissertation purposely omits these, as so many medical men have already written about them that to include them in his thesis would be like once more reheating leftover cabbage, and similarly likely to induce nausea, for which reason he will leave it at that.

Indeed, although Mencel's work is not absolutely the first monograph on the subject, nearly all previous studies had focused on diseases, specifically breast infection or cancer. Moritz Hoffmann had in 1662 published a 32-page dissertation "De naturali ac praeter naturali mammarum constitutione" containing an account of the healthy breast, but the book's second half was entirely concerned with pathology, while Johann Arnold Friderici's more general anatomical disputation "De constitutione mammarum" (Jena 1669) comprised a mere 18 pages. Mencel's dissertation, so frequently couched in a disarmingly coy tone, is thus the most extensive early monograph wholly devoted to the healthy female breast. It was reprinted in Franz Joseph Oberkamp's 1767 collection of excellent Leiden dissertations.

Somewhat browned throughout due to paper; old ink number annotated to title. Only three copies in the U.S. (National Library of Medicine; Cornell University; Academy of Natural Sciences of Drexel University, Philadelphia). 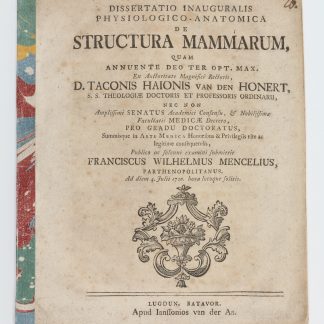