Very rare dissertation on the female breast and human lactation, written by Georg Friedrich Gutermann (1705-84), later a highly regarded obstetrician and in 1741 ennobled as "Gutermann Edler von Gutershofen". The author describes the healthy human breast, its locale, number, size, and shape, the areola and nipple, characterizes it as a gland, and gives an account of the nerves, milk ducts, and blood vessels. While their principal purpose, writes Gutermann, is that of producing milk for nourishment, he notes that the breasts are also regarded as things of beauty and enumerates those features of the female bust which are considered the most graceful (p. 13). The second section of the dissertation is devoted to pathology: ailments of the nipples, problems with lactation, inflammatory breast cancer, etc. The third and final section gives an account of various possible treatments.

Born in Biberach an der Riss in Swabia, Gutermann later worked in Kaufbeuren and Augsburg. Here he was a fierce adversary of the local obstetrician Johann Andreas Diesch, whose sad record of disastrously failed childbirths (brought about by a stubborn insistence that sharp instruments were necessary) had earned Diesch notoriety as the "butcher of women and children" (cf. Hirsch II, 705). Perhaps most remarkably, Gutermann was the father of the famous writer and salonnière Sophie von La Roche (1730-1807), sometime fiancée of C. M. Wieland. Gutermann saw to it that the young girl enjoyed a strict but encompassing Pietist education: she learned to read and write early and was instructed in languages, art, literature, music, and housewifery (though in spite of her pleas she was denied instruction in Latin).

Some browning and occasional waterstaining throughout, more pronounced in title and final leaf. Only two copies in the U.S. (National Library of Medicine; Cornell University). 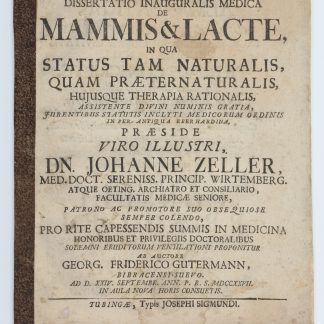