Pioneering work on vegetarianism by Shelley's mentor, from the library of a famous Regency dandy

Newton, John Frank. The Return to Nature, or, A Defence of the Vegetable Regimen; With Some Account of an Experiment Made During the Last Three Years in the Author's Family. Part the first [= all published].

First edition of this rare and early vegetarian work. J. F. Newton (1767-1837) sought to popularise the vegetable and distilled water diet of the physician and veganism pioneer William Lambe, whose patient he was. In his book, Newton promoted his own "regimen of distilled water and vegetable diet" (p. 66), believing vegetables to be the natural food of man and animal flesh unhealthy and unnatural. It was Newton who converted Percy B. Shelley to a vegetarian lifestyle, and his book influenced the poet's 1813 pamphlet on vegetarianism and animal rights, "A Vindication of Natural Diet".

Bound with this is a rare hygienic work by the surgeon J. Johnson (1777-1845), physician to the Duke of Clarence (afterward King William IV).

Interior very slightly browned, but a fine specimen, beautifully bound by Charles Hering for the library of Charles Stanhope, Viscount Petersham and afterwards the 4th Earl of Harrington (1780-1851). Known as "Beau" Petersham, the eccentric but much-imitated gentleman was a close friend of the Prince Regent George, who emulated his mannerisms in clothing, tea mixes, and consumption of snuff. Lord Petersham designed many of his own clothes and his fashions were quickly copied; he made famous the "Harrington" hat and the "Petersham" overcoat. The final pages of the present volume contain contemporary handwritten annotations about the poisonous effects of a fruitarian diet of (quoted from Jacques de Sade's "Mémoires pour la vie de Pétrarque") and about the high regard in which Galen and Hippocrates held water and abstinence, very likely in Petersham's own hand. 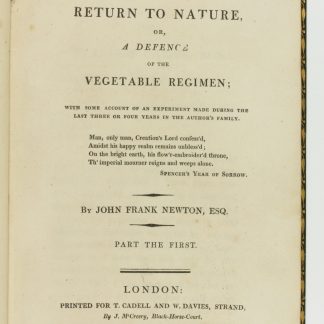