This fine, rare nautical map of the Arabian Gulf forms part of the famous "Neptune Oriental", a highly regarded collection of maps of the Middle and Far Eastern coasts which the author, the French hydrographer d’Après de Mannevillette (1707-80), had mapped during his time as captain for the French East India Company. The collection was first published in 1745, but redrawn and newly engraved by Guillaume-Nicolas Delahaye for the 1775 edition. The chart (plate 28 in the volume) is stated to be based on information collected by captain René Julien Le Floch de La Carriere and in many respects resembles the roughly contemporaneous works of William Herbert (Al Ankary no. 190) and d'Anville (Al Ankary no. 211). About the present map (in its 1745 version), Zoltán Biedermann writes, "It is interesting to note that, despite the fact that the shape of the Gulf is rooted in the Dutch tradition that we have come to name after Cornelis Roobacker, there are many new place names that were not there in the earlier decades. Like some other items from this period, this map is thus a precious document of the shifting commercial geography of Persia and the Persian Gulf" (Historical Atlas of the Persian Gulf, p. 290). Although the 1775 issue departs but little from its release three decades earlier, there are a number of differences: most notably, the new inset plan of the Kharg and Kharko Islands, and the inclusion of an island near Bahrain identified as "Deh-Rogn" - in fact, an early reference to Qatar; while "deh" means "village", "Rogn" signifies Ras Rakan at the northern tip of the Qatar peninsula, a prominent navigational landmark.

Evenly browned, with traces of insignificant waterstaining. A good copy. 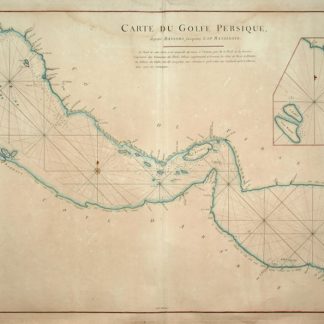