First and only edition of Lenin's witty denunciation of the so-called "zemstvo campaign" advanced by the Geneva-based Menshevik journal "Iskra" ("The Spark"). In a letter dated November 1904, the editors presented a plan for influencing the non-revolutionary "bourgeois opposition" in Russia by disseminating the demands of the Social Democrats through local zemstvos and discussion among the intelligentsia: thus, they hoped to stimulate liberal politicians to vote according to social-democratic views. In response, Lenin fiercely ridiculed the Mensheviks' ignorance of the disadvantages of liberal democracy, as well as the impracticality of tasking local zemstvos with influencing politicians.

Front wrapper bears the printed note "Only for party members"; this, as is revealed on p. 26, is a pun on the fact that Iskra's zemstvo plan, which was meant to be democratically disseminated across Russia, was issued with a similar conspiratorial disclaimer, a fact which Lenin found ridiculous.

Item 747 in the Bernstein and Souvarine catalog, which notes that the pamphlet was distributed illegally among local party offices in Russia and "played an important role in building up the Bolshevik iron discipline" and in convincing the Socialists that "pressure must be applied to the government, not liberals" (p. 126). 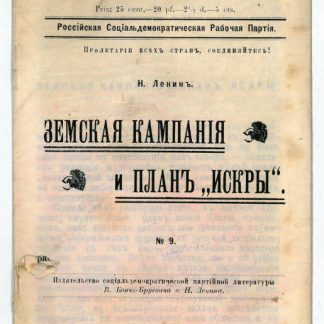