Unique and previously unknown: a foundational document of communism before the Communist Manifesto

The only known copy of this founding document of communism, the final stepping stone towards the Communist Manifesto. The eight-page leaflet is a circular addressed to the “Bund der Kommunisten” (“Communist League”) by the participants of its second and final congress. The League, a revolutionary, socialist secret society, had been formed but a few months previously as a successor to the “Bund der Gerechten” (the “League of the Just”). The pioneering new name was adopted under the guidance of its new members Karl Marx and Friedrich Engels at the League’s first congress, held in London from June 2 through 9, 1847. Their ideas re-framed the League as an international organization with a coherent programme. Although the League would be formally disbanded in 1852, it is considered the precursor of the International Workingmen’s Association, the first Marxist political party, and the nucleus of all later communist parties.

The League’s second congress was held in Brussels from November 29 to December 8, half a year after the first. On both occasions the respective accounts were published under the heading "Der Congreß an den Bund": the former on June 9 and the present, latter one on December 15 (“1848” being a misprint for 1847). No copies of either of these two publications are recorded in library catalogues or in the usual bibliographical reference works. Only one or two copies of the circular of the First Congress are known: one in the estate of the Hamburg socialist and “Bund” member Joachim Friedrich Martens (SUB Hamburg, acquired in 1912); the other, apparently, in the Stiftung Archiv der Parteien und Massenorganisationen der DDR im Bundesarchiv (formerly in the Institut für Marxismus-Leninismus beim Zentralkomitee der SED, but not currently listed in the SAPMO’s catalogues). While this first circular was republished in 1969 (in Bert Andréas’s collection "Gründungsdokumente des Bundes der Kommunisten"), the present circular of the Second Congress has so far remained unknown to scholarship. As the Bund was still a secret society, the first circular was pseudonymously signed “Heide (Sekretär)” and “Karl Schill (Präsident)”, standing for Wilhelm Wolff and Karl Schapper, respectively. While the name of Schapper, the president, is given undisguised in the present second circular, it may therefore be more than a simple typographical error that the secretary’s name is here rendered as “J. Engels”.

In his article "On the History of the Communist League", written and published in 1885, nearly four decades after the event, Engels provides what has become the received version of the genesis of the Communist Manifesto: “[at the Second Congress Marx] expounded the new theory in a fairly long debate [...] All contradiction and doubt were finally set at rest, the new basic principles were unanimously adopted, and Marx and I were commissioned to draw up the Manifesto”. It is reasonable that Engels’s account should be a retrospective condensation of a more complicated process, albeit one of which few contemporary documents have survived. Interestingly, the use of the term "Manifest der kommunistischen Partei" is not entirely consistent throughout the circular: it is stated that a work so titled, which was to replace the "Communist Creed" passed at the First Congress, had already been compiled, drafted, translated into various languages, and even enacted (p. 1 f.), but had yet to be published. Also, it was decided at the Congress that such a "Manifesto" should appear annually in various languages (p. 7). The "Manifesto" of 1847 is said to have been drafted by taking into account all suggestions submitted by members of the League (p. 7); it is also said already to have given the Communist movement its proper expression (p. 2). The present circular as here published is referred to as the "organ of the League in its new appearance" (p. 8), and the forthcoming issue thereof is promised to contain the text of the Manifesto, which all subscribers are asked to disseminate as widely as possible, as it is to embody a brief summary of the Party’s position and will serve as a guideline to the Party’s propaganda, proving to the world that the communists are aware of their own position, as of those of all other proletarian parties (p. 8).

These passages shed new light on the development of the famous text, fleshing out Engels’s compressed narrative. And yet his account remains fundamentally accurate: at the Second Congress Marx took on the assignment to develop the Communist Manifesto into a publishable text, working from whatever sources or previous drafts he may have had, and together with Engels completed the task within several weeks. This December 15 publication, giving the final account of the plans and decisions of the League before the publication of the "Manifest der Kommunistischen Partei" two months later, just in time for the February Revolution of 1848, must be regarded as a founding document of Communism, recording the very moment when the great motor of the Manifesto was ignited.

It is very likely that this circular, the only known specimen in the world, was originally in the collection of a revolutionary who was - at least for a time - close to Marx: previously bound up with a collection of pamphlets apparently assembled by a German radical democrat in English exile (arguably Karl Blind, 1826-1907), including a first edition of "Herr Vogt" with Marx’s autograph corrections, it was removed from this volume for conservational reasons and is now stored within an acid-free portfolio.

Not in Rubel, Stammhammer, Erstdrucke Marx Engels etc. No copies recorded in OCLC or KVK. Not in the 700-page catalogue of the books owned by Marx and Engels published in MEGA. 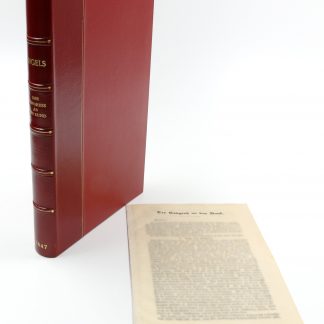