Koberger's third Latin Bible, printed with the same types as the second: in the splendid Gothic typeface which Koberger used exclusively for his Bibles; at the same time, the earliest type he is known to have used (cf. Klemm, Bibliogr. Mus., 722). The initial on fol. i shows the evangelist Mark with the lion; the tendril decoration reaches from the upper edge (slightly trimmed) to the lower one, ending in a coat of arms bearing the monogram "S-A-B". The second historiated initial on fol. iiii shows the Fall from Grace (Adam and Eve in paradise, with the apple tree and the serpent in the centre); here, the tendrils reach as far as the lower third of the page and also end in a coat of arms. Very exactingly rubricated throughout; signed at the end: "91 Jo fec". Several handwritten ownerships to fol. A1r, some contemporary, others as late as 1876: the name and printed bookplate of "C. R. Earley, Ridgway, Pa." (1823-98). Several manuscript marginalia. Some slight browning to the gutter of the first few leaves, staining to upper edge of fol. i. Insignificant waterstaining to upper edge of several leaves; occasional foxing or tiny smudged inkstains. Handwritten marginalia trimmed in places, but altogether a crisp, wide-margined copy. Some staining to the hefty binding; edges as well as a crack to the upper cover have been unobtrusively repaired. 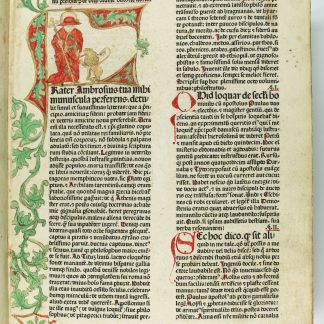