An unusual and attractive Italian Renaissance manuscript on the art of war, lavishly illustrated in colour and in a sumptuous contemporary binding. The text comprises eight chapters dealing with the duties of the captain, making gunpowder, siege-breaking devices, the deployment through artillery of artificial fire, smoke and poisonous fumes, the use of cannons, ballistics and artillerymen, and the logistics and practice of moving artillery and cavalry.

Some paper (and text) loss through oxidation of the ink, restored and silked. Rebacked, retaining part of the old spine, by Joseph William Zaehnsdorf in 1919, according to old pencil note on flyleaf.

Provenance: from the collection of Thomas Fremantle, 3rd Baron Cottesloe (1862-1956), commander of the Territorial Army and president of the Society for Army History Research. On a note pasted to the flyleaf, Cottesloe writes: "This was in the library of Wistow Hall, Leicester, during the lifetime of Sir Henry St John Halford Bt (1828-97) but nothing is known as to how or when it came there" (dated Wistow, September 1945). 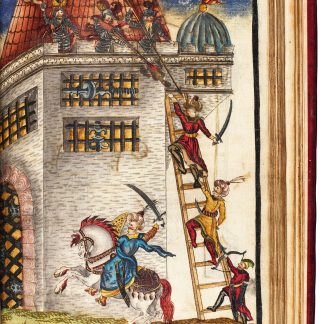